Recap of the 2017 NYSCADV Annual Meeting 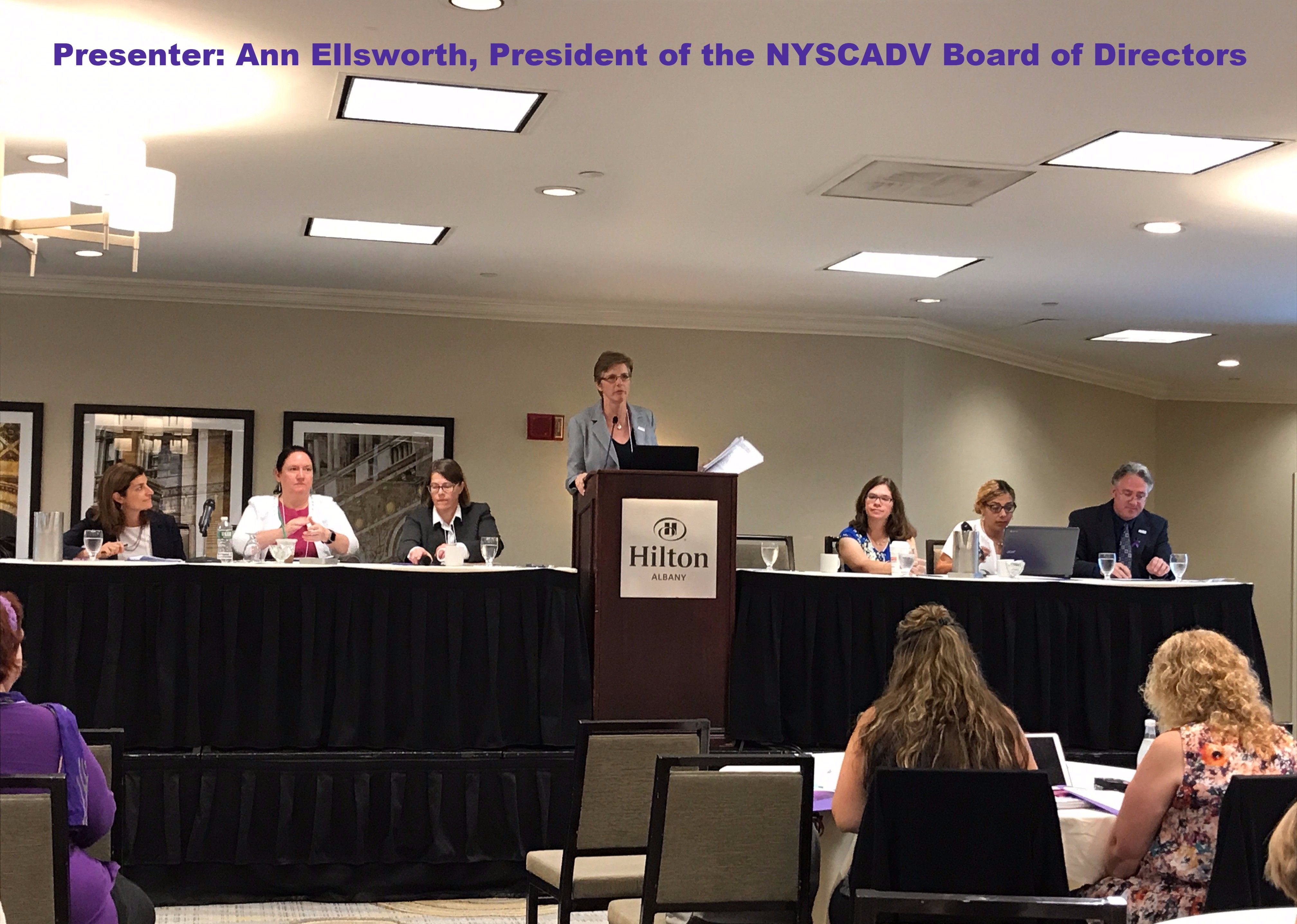 The New York State Coalition Against Domestic Violence (NYSCADV) convened its Annual Meeting on September 25th, 2017. It was a day for over 100 member programs, allies, advocates, and friends to gather together to educate, learn, share and strengthen the work to prevent and end domestic violence across New York State.

Next on the agenda was the State of the Coalition report presented by NYSCADV staff. Staff reviewed some of NYSCADV’s accomplishments over the past year including trainings, technical assistance, consulting, and legislative advocacy (a printed copy of NYSCADV’s 2016 Annual Report was provided to all attendees as well). Additionally, staff unveiled NYSCADV’s new website and associated Clearinghouse on Domestic Violence and Disaster website! The website also allows members to access archives from trainings and webinars via the member portal.

Shortly after lunch was the anticipated highlight of the day, Keynote Speaker Michelle Shenandoah’s presentation. Michelle D. Schenandoah, a writer, speaker, and thought leader is a member of Oneida Indian Nation Wolf Clan of the Haudenosaunee Confederacy. She has a longstanding commitment to ending domestic and sexual violence, and served for over four years as the President of the Board of Directors of the Seven Dancers Coalition which is focused on ending domestic violence and sexual assault through empowerment in Native American communities.

In 2016, Michelle represented the Seven Dancers Coalition at a national meeting of state domestic violence coalitions and Tribal coalitions which also included NYSCADV’s Executive Director. Because the foundation and philosophy of NYSCADV’s work to prevent and end domestic violence is to be Survivor-Centered & Trauma Informed; Intersectional, Accessible & Inclusive; and Implement Anti-Oppression & Social Change Work, we were particularly honored that Michelle could join us as the keynote. 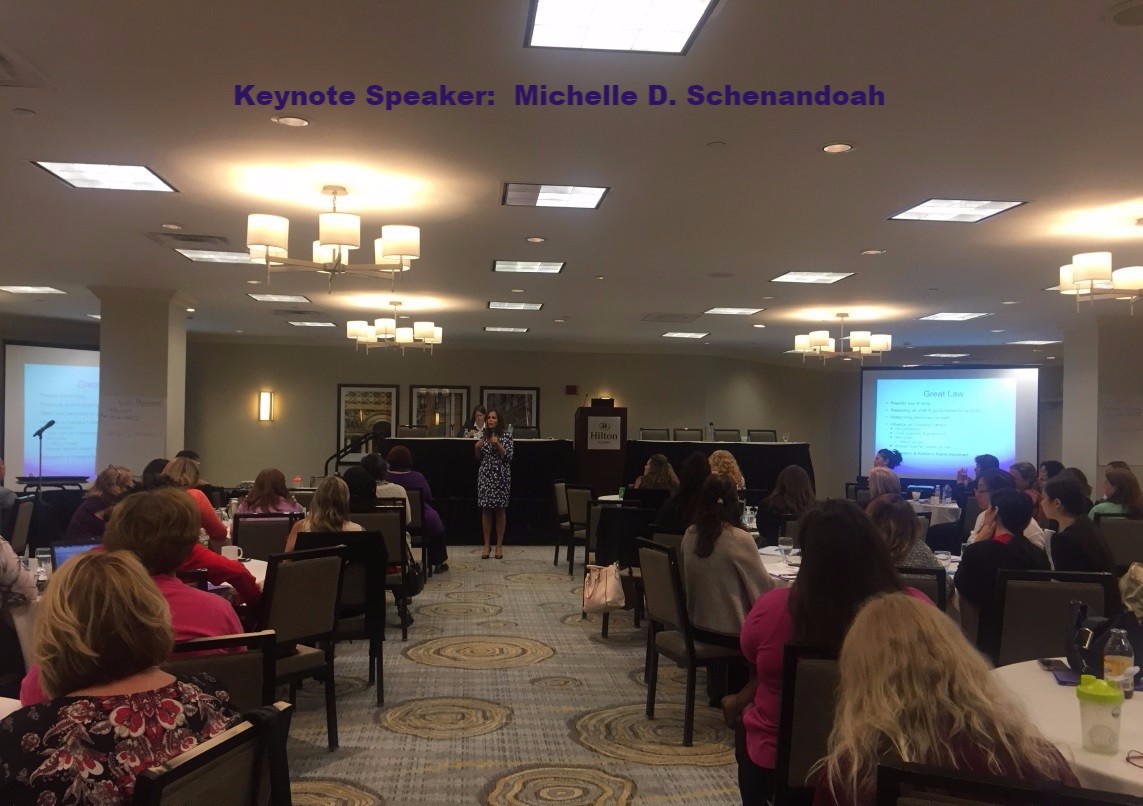 Michelle knows much about anti-oppression work, given the history of the Native American Nations and the United States and years of trauma and oppression that they have experienced at the hands of colonization. Anti-oppression concepts are interwoven in the very core of Michelle’s work, as she recognized that her work against oppression is the spark of social change. This is seen through her work to empower Native American women and their communities, so that they can overcome the limitations that statistics and stereotypes have placed on them.

Michelle also explained that in her work to end domestic violence and sexual assault with the Seven Dancers Coalition, intersectional, accessible and inclusive services are critical to begin true healing. Jonel Beauvais, the Cultural Community Outreach Worker of the Seven Dancers Coalition, showed this through her presentation on the structures that bound the Native American communities together and how they were destroyed because of the history of trauma that they experienced at the hands of colonization and later the United States government.

Jonel specifically highlighted the time in which the United States government took away Native children and sent them to boarding schools in an effort to eradicate Native American culture through assimilating the children into White culture. Jonel’s workshop demonstrated that because of the multitude of trauma that Native American populations have experienced, the identity politics that Native peoples have been subjected to, and the cultural barriers that they have faced make it necessary that any and all services must be intersectional, accessible, and inclusive.

At the same time, both Michelle and Jonel reinforced the philosophy of being survivor-centered and trauma informed. They reminded everyone that even while as a people, population, and community there are shared experiences, individually people are conquering their own personal battles. 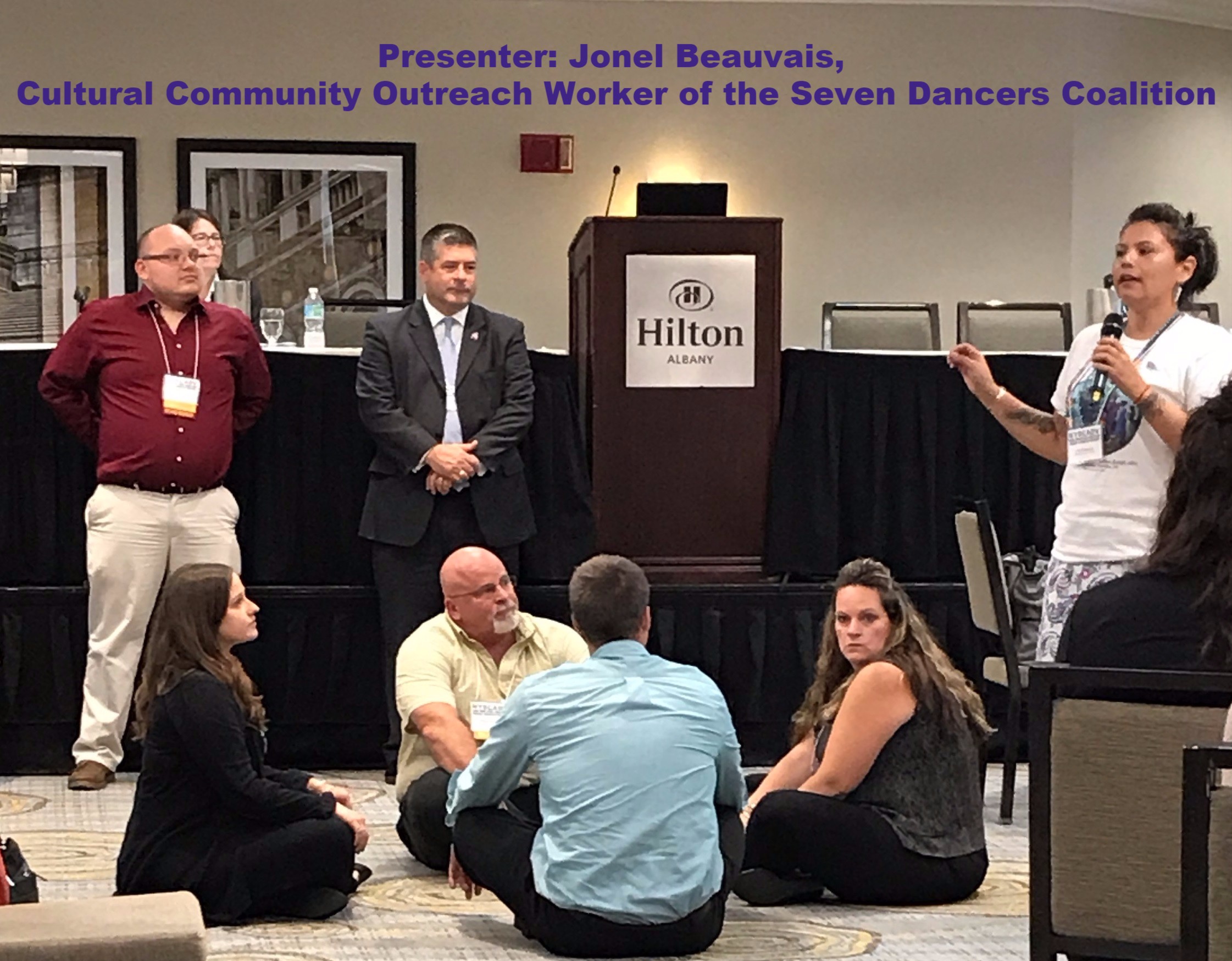 Keeping in mind all that was learned from Michelle and Jonel’s presentation, NYSCADV concluded the day with a discussion on NYSCADV’s vision of the future.
In that vision, members and NYSCADV staff see themselves continuing to uphold the concepts and philosophies that underlie our work to prevent and end domestic violence.

NYSCADV’s 2018 Annual Meeting will be held on Monday March 19, 2018. It’s our 40th Anniversary Year, and we look forward to seeing you at the meeting! 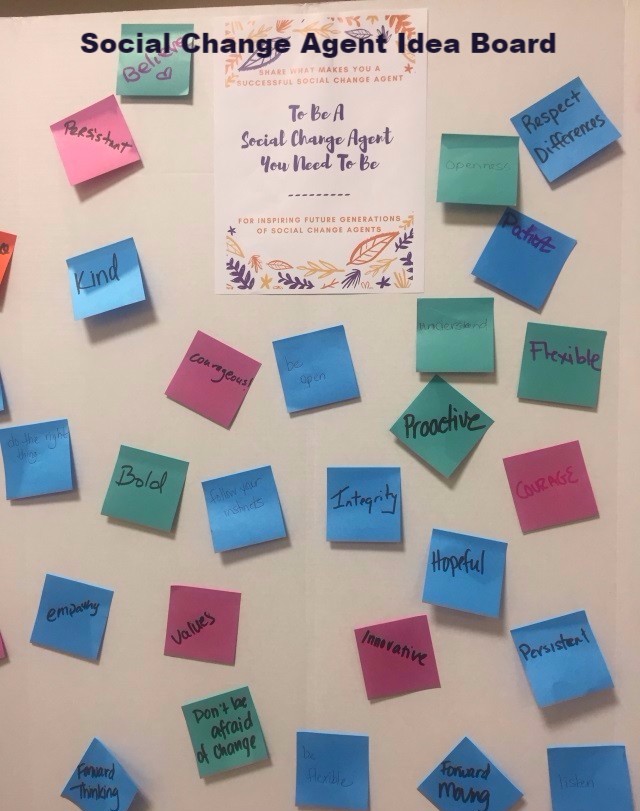 The Intentions of the Seven Dancers Coalition are:

1.) To Increase awareness of domestic violence and sexual assault against Native American Women, and their families, through education and prevention programs while incorporating the culture of our peoples.

2.) To strengthen the response to violence against Native American Women, and their families at the Tribal, Federal and State levels; and

3.) Identify and provide technical assistance to coalition membership and indigenous communities to enhance access for essential services to Native American Women and their families that have experienced domestic violence and sexual assault.

To learn more about the Seven Dancers Coalition, visit www.sevendancerscoalition.com