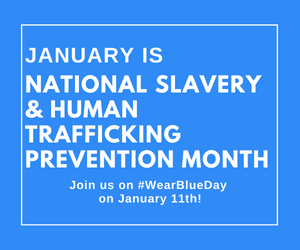 January is National Slavery and Human Trafficking Prevention Month. NYSCADV encourages you to learn more about this serious crime that leads to grave human rights violations.

Human trafficking is a form of modern-day slavery. This crime occurs when a trafficker uses force, fraud or coercion to control another person to engage in commercial sex acts or solicit labor or services against their will.

Human trafficking often intersects with domestic violence. According to Freedom Network USA, a coalition of experts and advocates fighting human trafficking in the US, this intersection takes many forms, including:

In NYS, sex trafficking and child sex trafficking are both class B felonies. NYS has passed several laws to raise awareness about and support survivors of human trafficking. Since 2018, the Legislature approved the following:

However, even with all this work accomplished, more needs to be done to raise awareness and support victims.

We can all do our part by learning the signs of human trafficking. With thousands of men, women and children being victimized every year, human trafficking can happen to individuals of any gender identity, age, race and nationality in any industry. Some common red flags to look out for include if an individual is showing signs of abuse; if a person is being underpaid or not paid at all, is working excessive hours or in dangerous working conditions; if a person is unable to leave home or work premises; if a person doesn’t have personal documents such as ID, passport or social security card; and if the person is under 18 and working in the commercial sex industry.[3]

You can also participate in #WearBlueDay on January 11th by wearing blue to show your support and promote awareness of human trafficking.  Take a selfie to spread the word, use the hashtag #WearBlueDay, and encourage your network to take a selfie.

To learn more about human trafficking and its intersections with domestic violence, visit the following:

[2] Freedom Network USA. What Are the Signs of Trafficking? https://freedomnetworkusa.org/the-issue/. Accessed 15 December 2020.