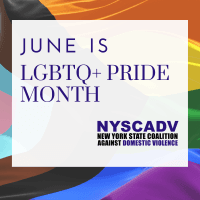 Over the last several years, we have been so proud to have had the opportunity to work with the amazing violence prevention team at the New York State Coalition Against Domestic Violence (NYSCADV). We have collaborated on Teen Dating Violence projects, art-based educational initiatives and reviewed various primary violence prevention programs. This year, we are working in concert, looking at LGBTQIA+ folks who experience patterns of violence at the hands of their partners and the available support.

We began by looking at the shifts in language over the years regarding violence prevention. I remember when I started at a domestic violence (DV) shelter over a decade ago, we struggled with deciding if it should be called “Gender-based Violence” or if it was “Men’s Violence Against Women.”  Which phrasing best explains the systematic macro-level understanding of the issue while also representing the individuals who come to domestic violence programs seeking safety?

At that agency, we ended up using “domestic or dating violence” to make the language more inclusive of all genders, as we know that folks in the LGBTQIA+ communities can also experience patterns of violence in their relationships at, or around, the same rate reported by the Centers for Disease Control and Prevention (CDC). That said, we still ran a much-needed women’s shelter while knowing we still had more work to do to provide support and safety for people in LGBTQIA+ communities. Today, that shelter now accepts male and male-identifying survivors of intimate partner violence.

Fast forward to 2019, as a volunteer at Queery, an art-based violence prevention education non-profit, I collaborated with NYSCADV to create a DV poster. This poster highlighted that verbal abuse is still abuse, aiming to debunk the myth that domestic/dating violence is not just physical abuse. In addition to that, the poster incorporated a rainbow design to help draw a connection between LGBTQIA+ folks and violence prevention. The hope was to shift the culture of DV prevention to include safety and support for not only cisgender women in relationships with men, but for all people experiencing a pattern of violence and control from their partners.

And even in the world of 2022, the debate over which term to use still exists. The question of what programs to provide and who is admitted to shelter continues in violence prevention circles. However, there are agencies bringing LGBTQIA+ folks into the forefront of violence prevention discussions, such as the Australian-based LGBTQ Domestic Violence Prevention Foundation. This foundation has tons of resources and has named May 28th as “LGBTQ Domestic Violence Awareness Day.”  We encourage you to check them out.

Prevention efforts like this from Australia are useful to model after but it’s important to note that here in the US, some folks have been working to provide direct legal service for queer communities. For example, the DC Volunteer Lawyers Project, through their immigration practice, offers legal and advocacy assistance to LGBTQIA+ victims of gender-based and domestic violence. This kind of legal support from lawyers who do this work pro bono is invaluable as they can help educate the court system and communities on the unique needs of LGBTQIA+ folks that have been hurt, coerced, and controlled by their partner while offering critical legal representation to that community.

And speaking of legal support, here is more good news! Just a couple of months ago, the Advocate reported that the Violence Against Women Act (more commonly known as VAWA) expanded legal provisions and funding for services to LGBTQ+ survivors. Kudos to the many programs around the country that worked so tirelessly to make that happen.

And of course, the list of violence prevention organizations that serve all communities and work to increase access to the LGBTQIA+ communities, specifically, is growing. One of the most prominent agencies in New York City is the Anti-Violence Project. In all their campaigns, they continue to make clear to the public that LGBTQIA+ victims of violence deserve support and safety.

So, the conversation about how to best provide safety and support for LGBTQIA+ victims of violence continues. Many organizations are forging the way forward to move the conversation from awareness to action. How will you move that conversation forward at your agency with Pride month?

To the many people and organizations that continue to move the conversation forward while supporting all those affected by domestic violence, you have a lot of be proud of.

Born and raised in Brooklyn, NY, Geoff has always had a creative streak and love of art.   After several years of art school, Geoff found jobs with the American Red Cross and the NYC Board of Education which allowed him to give back to the community.  Eventually Geoff found a home in Westchester County where he could write songs and poetry, work in clay as a ceramic artist, and further expand his design talents.

In 2018, along with his Queery partners, he created the Sticks and Stones exhibit which allowed people to have open conversations about terms used against the LGBTQ+ community, a poster about domestic violence, and Just Love, a queer-centric card game that playfully focuses on searching for love, fighting off hate, learning queer history and eventually finding your rainbow.  Since then, he and his teammates have started many new projects including Queer Zen, the Queery Pronoun Challenge, and Queer Community Book Club.  This past year, Geoff used his artistic talents to create greeting cards for queer and allied communities, under our Queermark project.  He has continued his work to improve and expand the knowledge and understanding of folks both inside and outside our LGBTQ+ community.

Starting Westchester County's First LGBTQ Youth Program in 1992, Young has had a long commitment in exploring queer culture and its positive effects on the dominant heteronormative culture.

Young is the recipient of the 2007 GLSEN Hudson Valley Leadership Award for his work with LGBTQ youth in both Rockland and Westchester Counties where he worked with numerous high schools and colleges on LGBTQ safety. He coordinated the Common Threads Youth Empowerment Retreat for several years in Rockland County where students and advisors as far as Rochester attended annually.  He served on the planning committee at PrideWorks, an annual LGBTQ conference held in Westchester County for high school students and their advisors.

Young has had the opportunity to co-design, facilitate and train with Camp PeaceWorks in Reading, PA, working with youth on various forms of oppression (i.e., sexism, racism, etc.) and learning more about intersectionality, power and inclusion.

While a faculty advisor for Rainbow Alliance at Monroe College in the Bronx for three years, the college marched in their first NYC Heritage of Pride Parade in 2016 and created gender neutral restrooms on both Bronx and Westchester campuses.

James is currently a volunteer at The Loft LGBT Community Center in White Plains, NY, where he presented at the annual gala, co-hosted the Pride Finale 2020, and currently facilitates the Men’s Group,  CALM/Queer Zen meditations, Queer Community Book Club (QCBC).  In the past few years, Young has created Tech Talks (a program connecting people through technology), and Veg Out (a vegetarian potluck social to promote connections through socially conscious consumption). He is the proud recipient of the 2019 Pace University's Lavender Alum Award and currently serves on the Westchester County LGBTQ Advisory Board.

As the Program Director at Queery, Young has developed programs and projects to make queer theory accessible, fun and interactive.