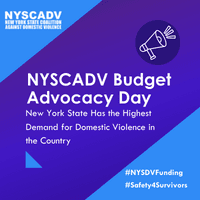 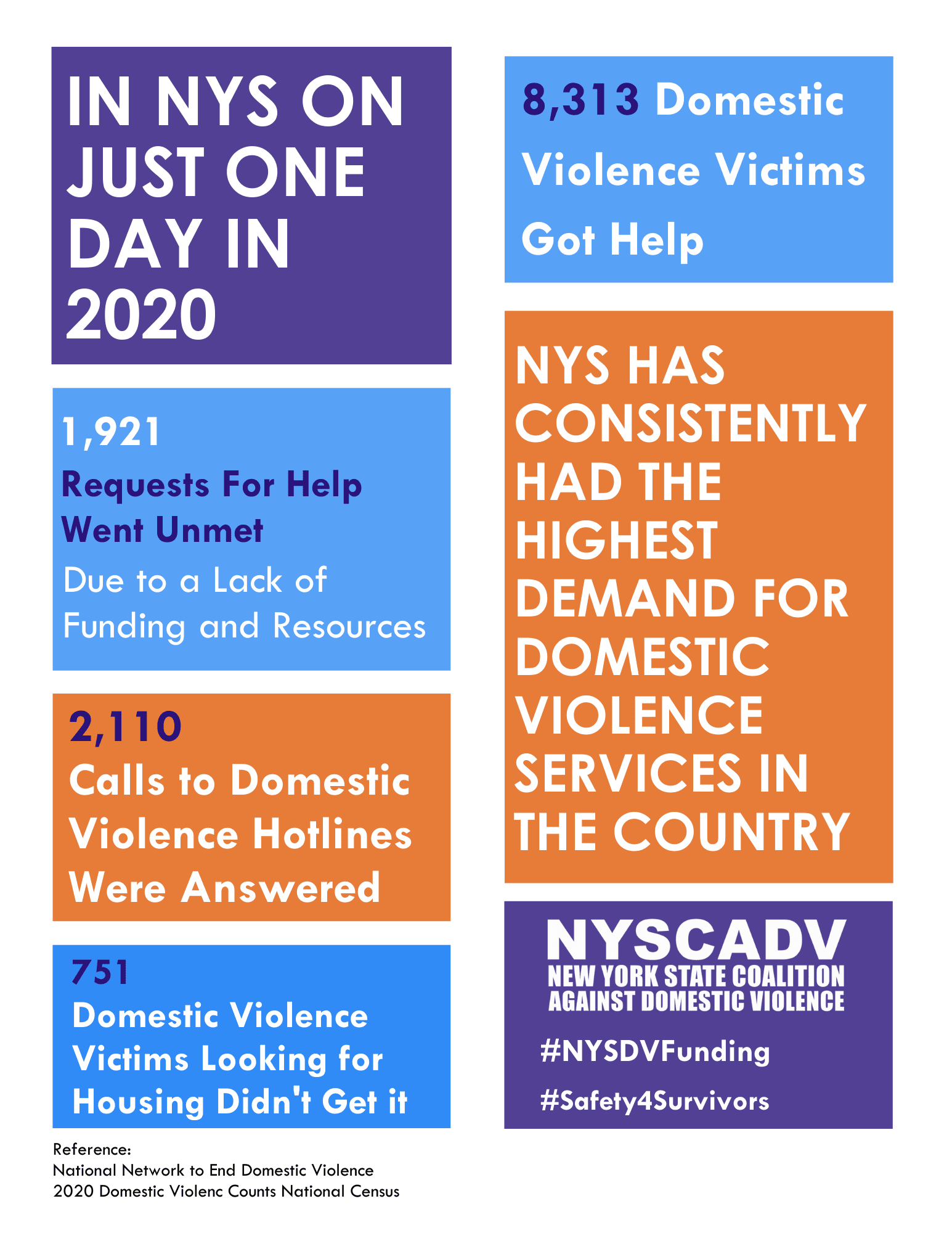 Urgent action is needed to ensure that DV service providers have the funding required to maintain service provisions to as many of New York’s DV victims as possible. To make a united effort and increase our impact, we are asking advocates to contact their NYS Senators and Assemblymembers. Below you will find Talking Points and helpful Q&A.

1. Earmark $25 million this year and next for OVS to extend current contracts with all victim assistance providers for two years, during which time the federal funding coming into New York is expected to rebound

Due to significant decreases in New York’s federal Victims of Crime Act (VOCA) grant, the state is slashing funding for more than 300 victim assistance providers throughout New York. VOCA funding is the primary source of funding for many of these programs, so cuts will significantly impact services for all victims, including domestic violence and sexual assault survivors, children who have been sexually abused, immigrant and LGBTQ victims, victims of gun violence and vehicular accidents, and victims in marginalized communities. This is not expected to be a long-term problem facing New York State. New York’s federal VOCA grant is expected to increase in the next two to three years. In the interim, the Legislature and Governor Hochul must dedicate $25 million in this year’s budget and again next year to ensure the continuity and sustainability of services for victims.

Q: You are asking for $25 million in this year’s budget, and again next year. What is the basis for this request?
A: This is our best estimate of how much the state Office of Victim Services needs to maintain existing contracts with victim service providers.

2. Remove the Governor’s proposal to mandate a 40-hour training and certification requirement for all DV advocates and to create a training institute at OPDV responsible for providing such training

Now is not the time for New York to be placing additional government mandates or requirements on DV service providers. Yes, we are experiencing significant challenges in retaining and training new employees. But the New York State Coalition Against Domestic Violence, our statewide coalition, is the federally designated training and TA provider for DV programs. Like all state DV coalitions, NYSCADV trains advocates on a wide array of social, legal and economic issues that affect victims’ safety and well-being. We do not need New York State to train our staff. Further, the Governor’s proposal does not simplify the over-regulation of DV programs. Instead, it adds the state Department of Health into the mix. So now, six state agencies would be responsible for the funding, regulation and/or training of DV advocates – the state Office of Children and Family Services (OCFS), the state Office of Temporary and Disability Services, OPDV, the Office of Victim Services, the Division of Criminal Justice Services and now, DOH.

Q: What are the current training requirements for DV advocates?
A:  OCFS is responsible for licensing and approving DV programs and establishing regulations for their operation. Current regulations require a minimum of 12 hours of training for advocates. There may be some merit in increasing the number of training hours required, or in having a more consistent approach to training throughout the state. But we don’t think the state needs to take over this responsibility, nor do we want to see the new mandate in statute. Frankly, we would have appreciated engaging in a dialogue with OPDV and the Governor about this proposal before it appeared in the Executive Budget.

Q: Would OCFS still be responsible for licensing and approving DV programs under this   proposal?
A:  Yes, which makes this proposal even more problematic. The proposal does not modify the existing training regulations, so there would be a disconnect there. Plus, under the proposal, OCFS would retain its responsibility for licensing and approving DV programs, but OPDV would be responsible for training and certifying staff of these programs. That makes no sense.

New York’s non-residential DV services, such as hotlines, information and referral services, counseling, legal advocacy and financial empowerment assistance, are funded in part with a dedicated stream of TANF funding.

This year’s Executive Budget appropriates only $3 million for these critical services across the State. This funding level is the same as it was when first proposed more than 20 years ago. If the funding was adjusted for inflation, it would have grown to $4.6 million. It is critical for the Legislature and Governor to increase the TANF set aside for non-residential DV services to $6 million to account for the current heightened demand and inflation.

Q: If the inflation-adjusted amount is $4.6 million, why are you asking for $6 million?
A: New York relies almost exclusively on federal funding to support domestic violence services. These funds have either been cut or stagnant for several years, and have not been sufficient to address current demand. As you may know, New York has the highest demand for domestic violence services in the country. During the pandemic, that demand has grown and continues to remain elevated. We are asking the Legislature to set aside $6 million in recognition of this increased demand for services.

The Governor’s Executive Budget includes a $5 million appropriation to OCFS to pilot a new flexible funding model that reduces the barriers and challenges for domestic violence service providers assisting survivors.

Transforming New York’s antiquated domestic violence service delivery system is critical to ensuring victims and their families receive the support they need immediately and without conditions. The Governor’s proposal is based on foundational work conducted by the Governor’s Domestic Violence Task Force and is a critical first step for the State to transition to an innovative, survivor-centered service delivery system. We ask the Legislature to maintain this $5 million appropriation, and the $10 million re-appropriations.

Q: Why do we need a new method for funding DV programs?
A: New York’s method for dispersing funding to DV agencies is antiquated, having been established more than 30 years ago when most DV victims sought emergency shelter. This focus on residential programs continues to be the primary method for funding DV service providers, yet not all DV survivors want to stay in emergency shelter. Rather, DV survivors want to stay in their homes, or with family and friends, while they obtain non-residential DV services such as counseling, legal services, child care, housing assistance, etc. In addition, the per diem reimbursement model requires DV service providers to dedicate an inordinate amount of time chasing down payments, time that is better spent on providing services to victims.

Q: Do you have an opinion about the other DV proposal in the budget, the one that extends protections for DV survivors?
A: Part X adds an individual’s status as a DV victim to many areas within the Human Rights Law. For example, it ensures creditors do not discriminate against DV survivors, or real estate boards, educational institutions in the use of their facilities, employment agencies, labor organizations and others. So yes, we support inclusion of that proposal in the budget.

Q: There is a lot of discussion about the new bail reform laws and whether judges should be given discretion to assess an individual’s dangerousness. Do you think changes are needed?
A: We supported the state’s goal of reducing the number of defendants held pre-trial because they couldn’t afford bail. However, since the new laws went into effect, we are seeing some troubling unintended consequences. We hear that more training is needed for law enforcement to understand the options when responding to a DV incident. And training is needed for courts to understand when they can detain DV offenders or set conditions for their release. Above all, though, we are focused on the needs of DV survivors and ensuring they have access to support services as soon as possible after an incident occurs and an arrest is made, regardless of whether the offender is taken into physical custody or not. We look forward to working with the Legislature to discuss these issues and identify potential solutions 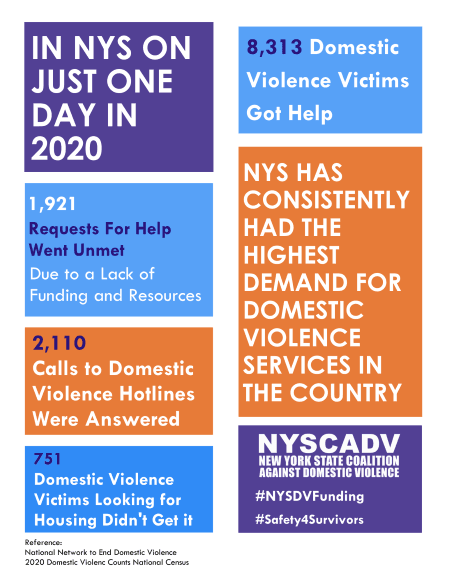