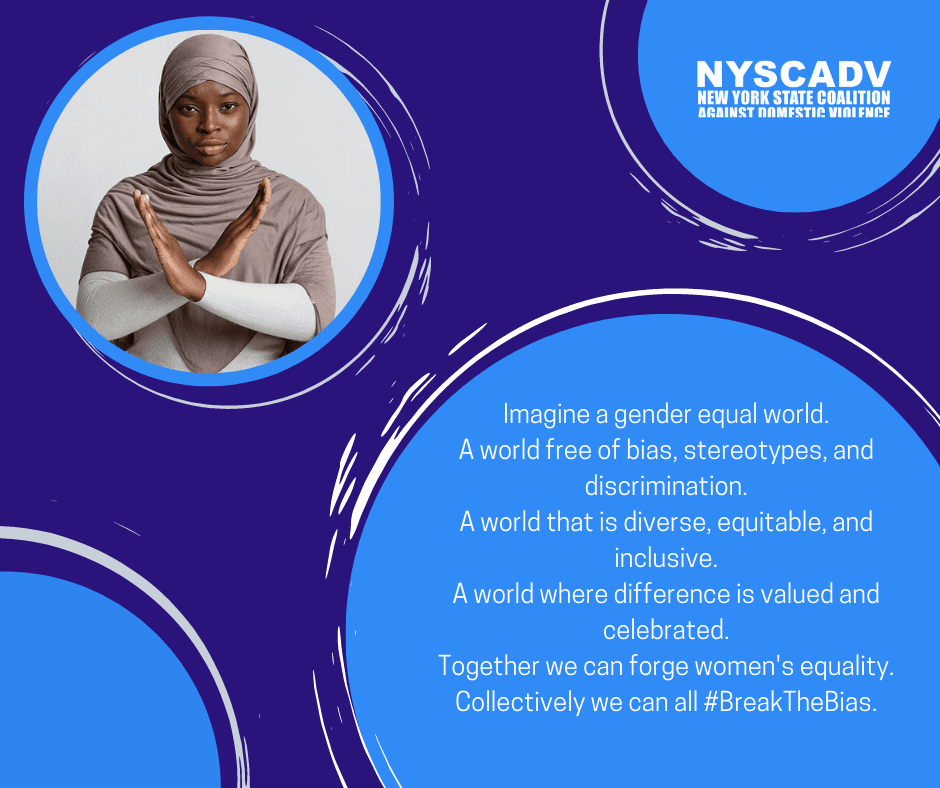 Today is International Women's Day (IWD)! Marked annually during Women’s History Month on March 8th, it is a global day celebrating the social, economic, cultural, and political achievements of women.

For International Women's Day, Women’s History Month, and in keeping with the United Nation’s theme #BreakTheBias, NYSCADV honors the incredible women in the movement to end domestic violence who have worked tirelessly, fearlessly and unapologetically on behalf of survivors of all forms domestic, sexual and gender based violence.

What began as a small grassroots efforts by women -sisters, neighbors and friends- opening up their homes to women escaping from their abusers has evolved into a global movement to end all forms of gender-based violence and the social and health disparities that cause it.

We honor our predecessors, “The Grandmothers of the Movement,” by continuing their legacies and building on their work. We honor Black, Indigenous and People of Color (BIPOC) leaders like Ida B. Wells, Audre Lorde, and Kimberly Crenshaw, who were outspoken on violence against women, especially against Black women, and contributed much needed analysis to our efforts and shaped the movement into what it is today. We honor and acknowledge that we owe a great debt of gratitude to the Haudenosaunee women leaders who coached and supported New York’s celebrated Suffragists with little to no acknowledgement and continue to teach us today.

There is still much work to do. The National Intimate Partner and Sexual Violence Survey: 2010 Summary Report found that “more than 1 in 3 women and more than 1 in 4 men in the United States have experienced rape, physical violence, and/or stalking by an intimate partner in their lifetime.” Additionally, Black survivors of domestic violence experience some of the highest rates of intimate partner violence. According to the 2011 National Intimate Partner and Sexual Violence Survey reported that “approximately 41% of Black women have experienced physical violence by an intimate partner during their lifetime compared to 31% of White women, 30% of Hispanic women and 15% of Asian or Pacific Islander women.”

NYSCADV will continue to elevate the experiences of BIPOC survivors of intimate partner violence and collaborate with BIPOC women leaders to create a future where all people can live free from violence and all forms of oppression. We will continue to advocate for legislation and policies that empower women, survivors, and historically marginalized populations.

Today on International Women’s Day, and throughout Women’s History Month in March, we encourage you to learn more about inspiring work being done in the field.

Learn about the amazing Black women-led organizations creating change in communities across the country:

In Our Own Voices: A New York State based nonprofit, whose mission is to ensure the physical, mental, spiritual, political, cultural and economic survival and growth of the Lesbian, Gay, Bisexual and Transgender people of color communities.

Women of Color Network, Inc.: A national grassroots initiative dedicated to building the capacity of women of color advocates responding to violence against women of color.

Ujima: The National Center on Violence Against Women in the Black Community serves as a national, culturally specific services issue resource center to provide support to and be a voice for the Black Community in response to domestic, sexual, and community violence.

Learn about the incredible work that these Indigenous organizations are doing to increase awareness and promote change across the nation:

Seven Dancers Coalition: A New York State based nonprofit whose mission is to uplift the families of Indigenous Communities by educating and restoring traditional values with the purpose of strengthening self-confidence and dignity.

Mending the Sacred Hoop (MSH): A Native owned and operated non-profit that exists to address violence against Native women and works to end it. MSH provides grassroots building, coalition building, and trainings on addressing, responding, and preventing violence against American Indian/Alaska Native women in their home community of Duluth, MN and throughout Minnesota.

NYSCADV will continue to move forward in this vital work today, and every day. We invite you to join us in these efforts!

Visit NYSCADV’s Prevention Toolkit to learn more about resources, tools, and strategies on engaging communities to address inequities that stem from systemic oppression such as racism and heterosexism, from an intersectional, social justice framework.

You can also visit our website to learn more about the work we do on Domestic Violence and Indigenous Peoples.